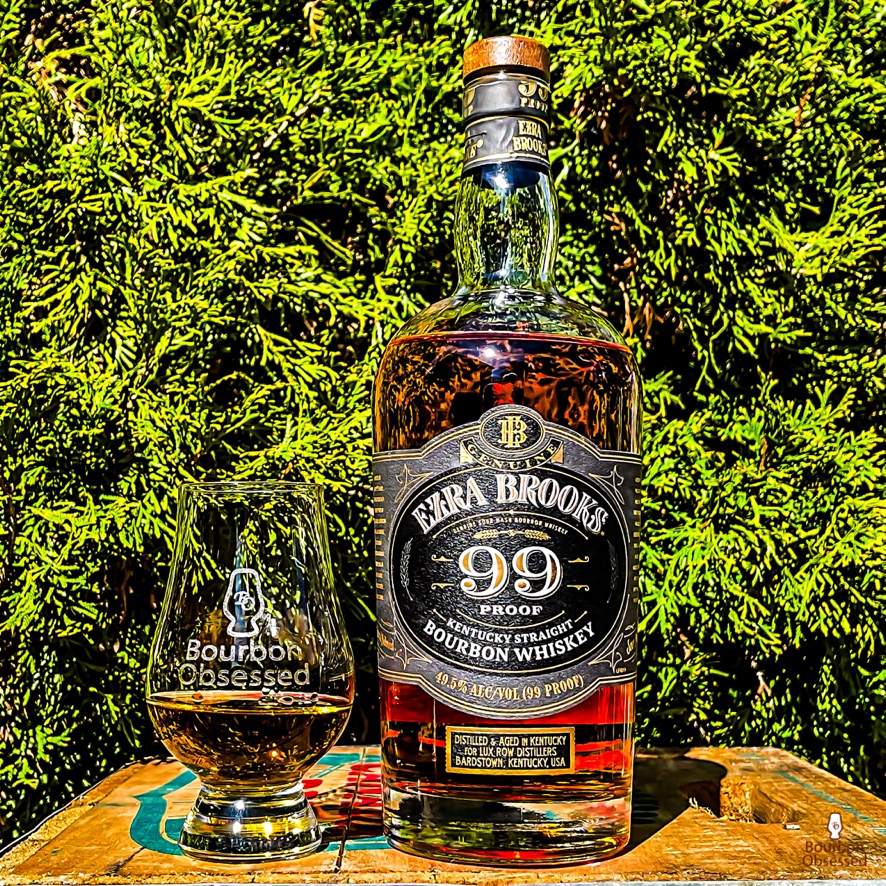 So, what’s the story with the Ezra Brooks 99 Proof Bourbon? According to the Ezra Brooks website: “Bottled at an elevated 99 proof for an enhanced flavor profile, this pure, oak-barrel-aged Kentucky straight bourbon whiskey is charcoal filtered for a smooth, mellow finish and features a spicy, ryed bourbon mash bill.”

I’m sure everyone is familiar with the story of Ezra Brooks. How he was the first to distill with 51% corn, the first to use oak barrels, and the first to cook with fire … wait… no… none of that is true! You see, Ezra Brooks was made up. Back in the 1950’s, Jack Daniel’s whiskey was very popular and in demand, and actually in short supply. A man called Frank Silverman saw an opportunity and created the Ezra Brooks brand out of the blue. He pretty much copied Jack Daniel’s style, sourced bourbon and bottled it at the old Hoffman Distillery. The brand has changed hands over the years, and is now owned by Luxco. (source: Sipp’n Corn) The bourbon itself is still sourced form Heaven Hill, I believe. The mashbill is identical to the Heaven Hill rye bourbon mashbill -78% corn, 10% rye, and 12% malted barley.

How does it compare to Old Ezra 7 Year?

For comparison, I just happened to have an open Old Ezra Aged 7 Years nearby. While many of the same flavors are there, the balance is completely different. In the 7 year, caramel and a full mouthfeel dominate, and the flavors are all in harmony; whereas in the 99 they aren’t getting along quite as well. Not to say this is a bad bourbon, but those extra years and a bit more proof really allow the flavors to develop and meld.

Overall, Ezra Brooks 99 Proof Bourbon is a decent bourbon in its price range, which for me was $25.99. Have you had the Ezra Brooks 99? What did you think? Cheers!🥃

Want to read about another Lux Row bourbon? Check out our review of the Daviess County Bourbon Finished in French Oak Casks!