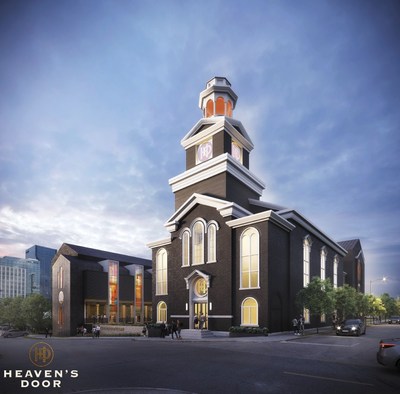 NASHVILLE, Tenn., April 9, 2019 /PRNewswire/ — Heaven’s Door Spirits, developed in partnership with legendary musician and artist, Bob Dylan, is celebrating today the 50th anniversary of the release of Dylan’s iconic album, “Nashville Skyline” with the announcement of the Heaven’s Door Distillery and Center for the Arts in downtown Nashville, slated to open in Fall 2020. The new center will feature the Heaven’s Door craft distillery, complete with guided tours, a whiskey library, restaurant and a 360-seat live performance venue, all part of a renovation project to the 160-year-old Elm Street Church that will also display pieces of Dylan’s paintings and unique metalwork sculptures.

“We’re thrilled to celebrate the anniversary of ‘Nashville Skyline’ with our own addition to Music City’s skyline,” said Marc Bushala, CEO of Heaven’s Door Spirits. “Nashville is the natural home for the Heaven’s Door distillery and the Elm Street Church is a fitting home for Dylan’s visual artwork. We spent years looking for a property that truly captures the essence of the Heaven’s Door brand, and when we finally found the deconsecrated church in SoBro, we immediately knew that it would be the perfect physical and spiritual center for the brand, and Bob’s art.”

Widely regarded as one of Dylan’s greatest reinventions, “Nashville Skyline,” his ninth album, brought country rock music to the masses and is credited with changing the Nashville music scene forever. Described by Rolling Stone as having achieved “the artistically impossible,” the album showed a new, more relaxed side of Dylan, which inspired an era of music revolving around storytelling, and changed the way people thought about country rock music.

Each of the brand’s three inaugural expressions has a direct tie to Tennessee – either through distillation, aging, barrel finishing or bottling. Tennessee boasts a long tradition of making great American whiskeys and its sweltering summers provides perfect conditions for barrel aging.

The Heaven’s Door portfolio of whiskeys is available nationwide and online via ReserveBar.com. For more information about the brand and the brand’s future home in Music City, visit www.heavensdoor.com or engage with the brand on Instagram, Facebook or Twitter.

Heaven’s Door Spirits is a collaboration between legendary artist Bob Dylan and Spirits Investment Partnership (“SIP”). The group brings together a leading roster of beverage, music and distiller professionals who are passionate to find new whiskey expressions and innovations to encapsulate the art of an irrepressible American artist. Heaven’s Door Spirits is Bob Dylan’s first and only consumer brand partnership in his 50 years as a worldwide cultural icon, which makes this collaboration unique and important – a true interplay of art, craft and commerce. Website: www.heavensdoor.com.

Bob Dylan is generally regarded as one of the world’s most influential and groundbreaking artists. In the decades since he first burst into the public’s consciousness via New York City’s Greenwich Village folk music scene in the early 1960s, Bob Dylan has sold more than 125 million records and amassed a singular body of work that includes some of the greatest and most popular songs the world has ever known. He continues to traverse the globe each year, performing more than 100 concerts annually in front of audiences who embrace his new material with the same passion as his classic output. In recent years, his work as an author and visual artist has further burnished his popularity and acclaim; a worldwide best-selling memoir, Chronicles Vol. 1, spent 19 weeks on the New York Times Best Seller List, in 2004, and several major exhibitions of his paintings and iron gates have been shown in recent years at some of the world’s most prestigious museums and galleries.

Bob Dylan’s contributions to our culture have been recognized with numerous honors and accolades. In December 2016, he was awarded the Nobel Prize for Literature by the Swedish Academy “for having created new poetic expressions within the great American song tradition.” In 2012, he was awarded America’s highest civilian honor, the Presidential Medal of Freedom, by President Barack Obama. In addition to winning 11 Grammy Awards, Dylan has achieved six entries in the Grammy Hall of Fame, which honors recordings of “qualitative or historical significance” at least 25 years old. Bob Dylan recently released his 38th studio album, a triple-album set aptly titled, Triplicate.

Spirits Investment Partners (SIP) is a boutique spirits innovation and brand development company comprised by a team of highly-seasoned distilled beverages professionals with expertise with branding to production, sales and marketing, and finance.