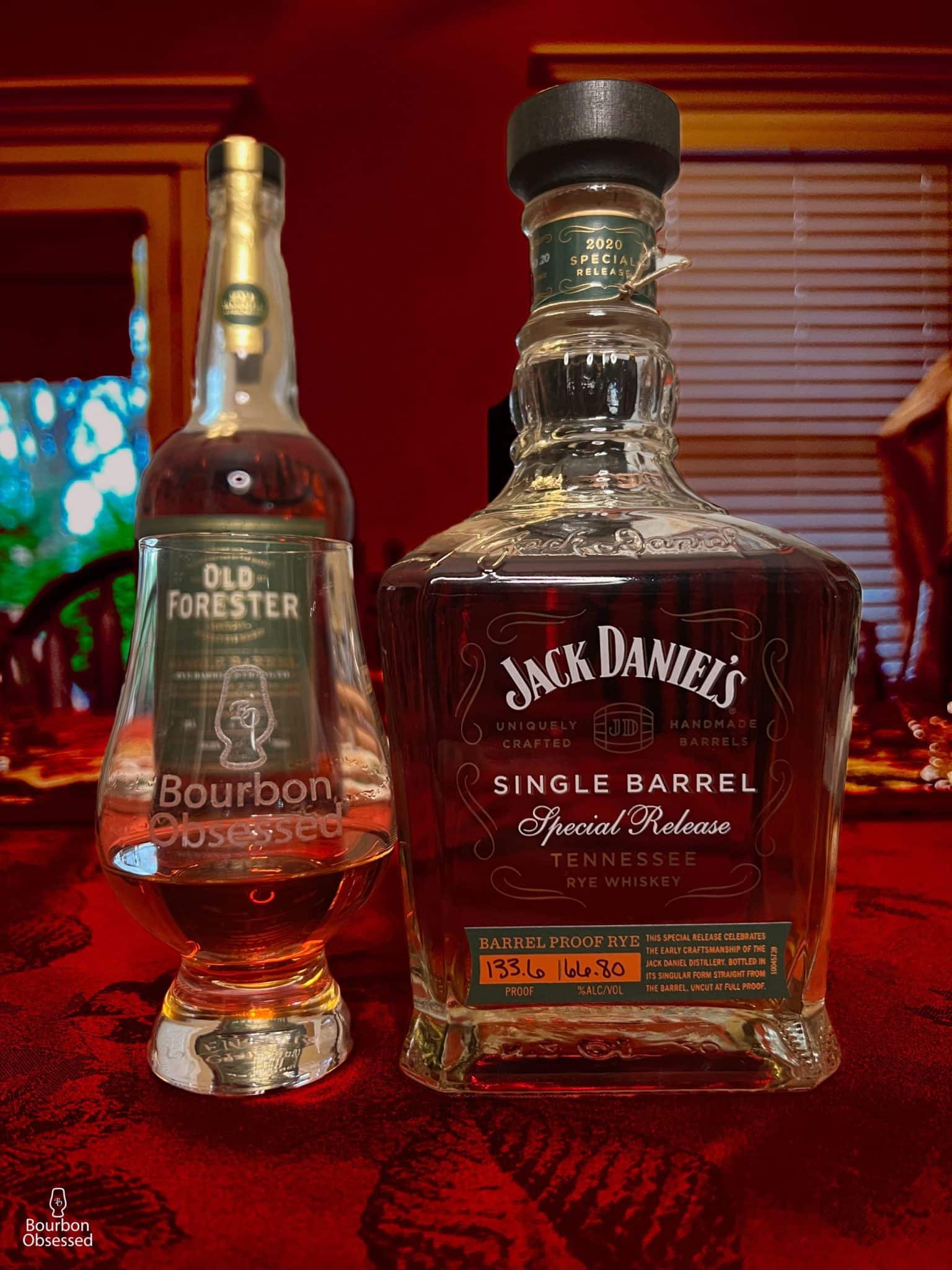 So who knew Jack Daniel’s made a rye? OK. it really hasn’t been a secret. But who knew they made a Barrel Strength Single Barrel rye? I know that most of you knew that, too. But read on; hopefully you don’t already know everything that I am going to say.

Jack Daniel’s rye has apparently undergone its evolution to its current iterations beginning in 2012, with the release of Unaged Rye. This was followed in 2014 by Rested Rye (a 2 year old rye), then by Jack Daniel’s Single Barrel Rye in 2016, presumably a 4 year old rye. The Jack Daniel’s Tennessee Rye on the market today was introduced in 2017 and comes in at 90 proof. The latest addition is this one, with by far the longest name, Jack Daniels Single Barrel Special Release Barrel Proof Rye released in late 2020. There was also a Barrel Strength rye in the Tennessee Tasters’ series.

All of these Jack Daniel’s ryes have something in common. They all share the same mash bill, which is 70% rye, 18% corn and 12% malted barley. The all undergo Jack Daniel’s charcoal mellowing (aka the Lincoln County Process), and they all use the spring water from Jack Daniel’s spring, Cave Spring Hollow (which, BTW is very cool (as in “wow!” as well as in temperature – a constant 56F), if you’ve ever been there).

👉🏻Nose: Caramel, baking spices with , what’s that? Juicy fruit gum and chocolate?! There’s some honey and oak, too; moderate alcohol
👉🏻Taste: Fairly dry, with some char up front, but loads of caramel and some banana in the back; there’s a hint of spearmint, too; full, warm, mouthfeel
👉🏻Finish: Dryness and char continue into the finish which then gets dominated by white pepper. The flavors continue throughout, and even at the end there is somehow still lingering juicy fruit gum and banana and some spearmint. Long finish. Healthy Tennessee hug.

Jack Daniel’s Barrel Proof Rye is an excellent rye. There’s a warm fuzzy feeling that can’t be denied. How the fruit flavors linger through the very long finish and at this crazy high proof for a rye is just a mystery. But a mystery I have no desire to solve. Let’s just let Jack be Jack and enjoy what they give us. As they say, “…if you know Jack, you’ll know Jack Daniel’s Tennessee Rye.” Maybe one day we’ll get down there again and have a little of the mystery unveiled…or maybe not.

I hope you enjoyed my Jack Daniel’s Barrel Proof Rye Review! If you would like to read about another great barrel strength rye from Jack Daniel’s parent company, Brown-Forman, check out my Old Forester Barrel Strength Rye review! Cheers!🥃