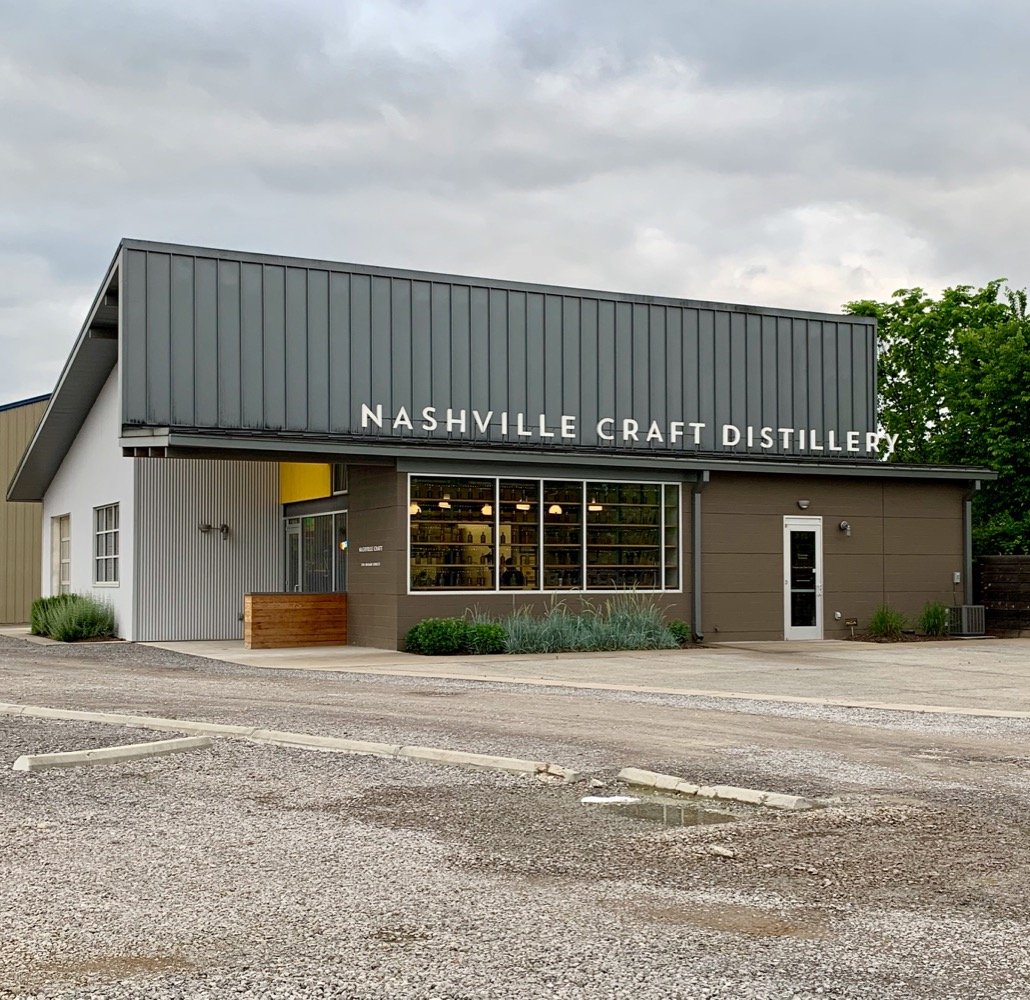 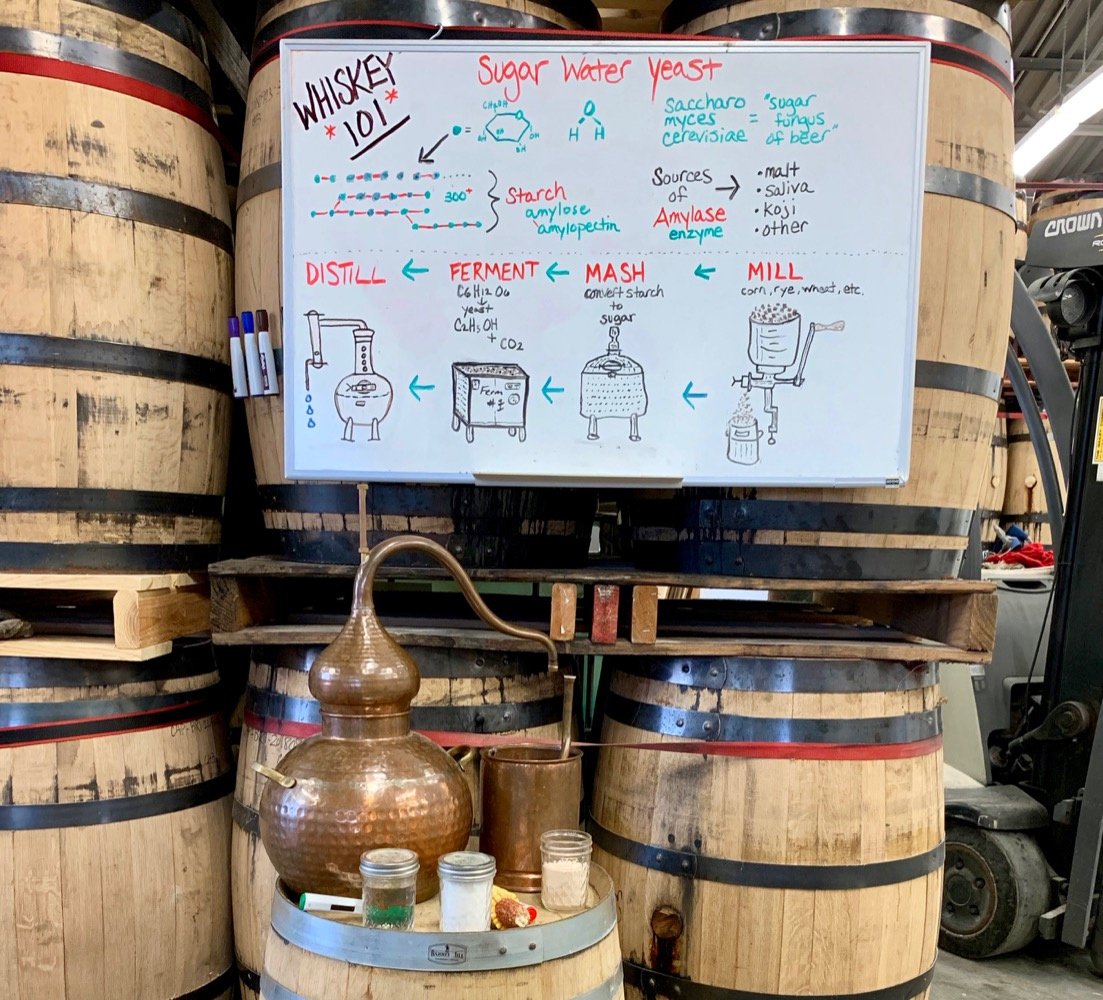 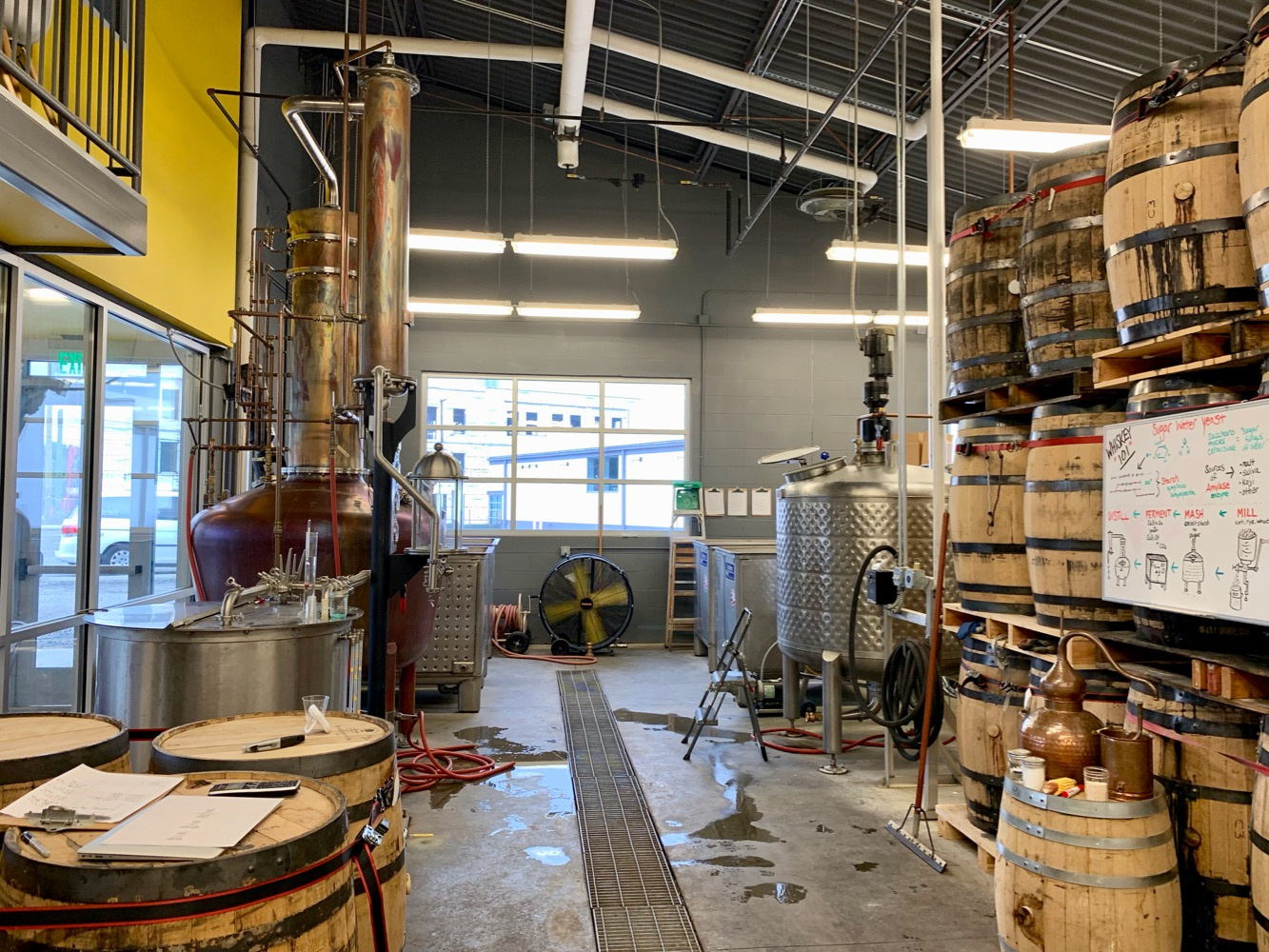 Nashville Craft Distillery - Everything is in one room. Mash tun, still, barrels and classroom 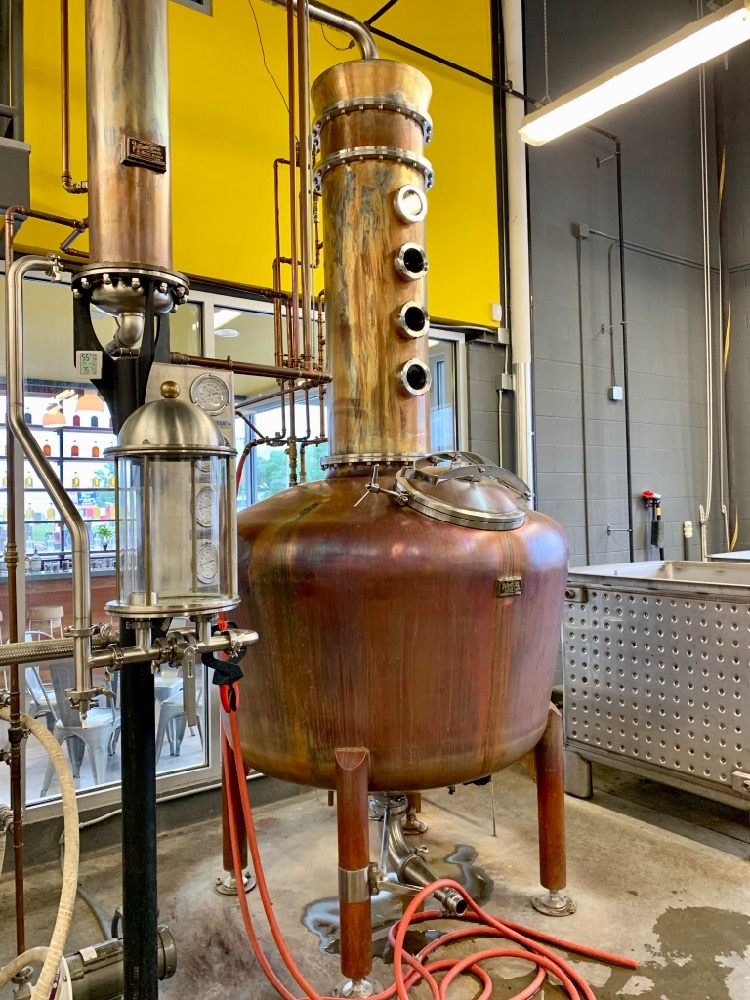 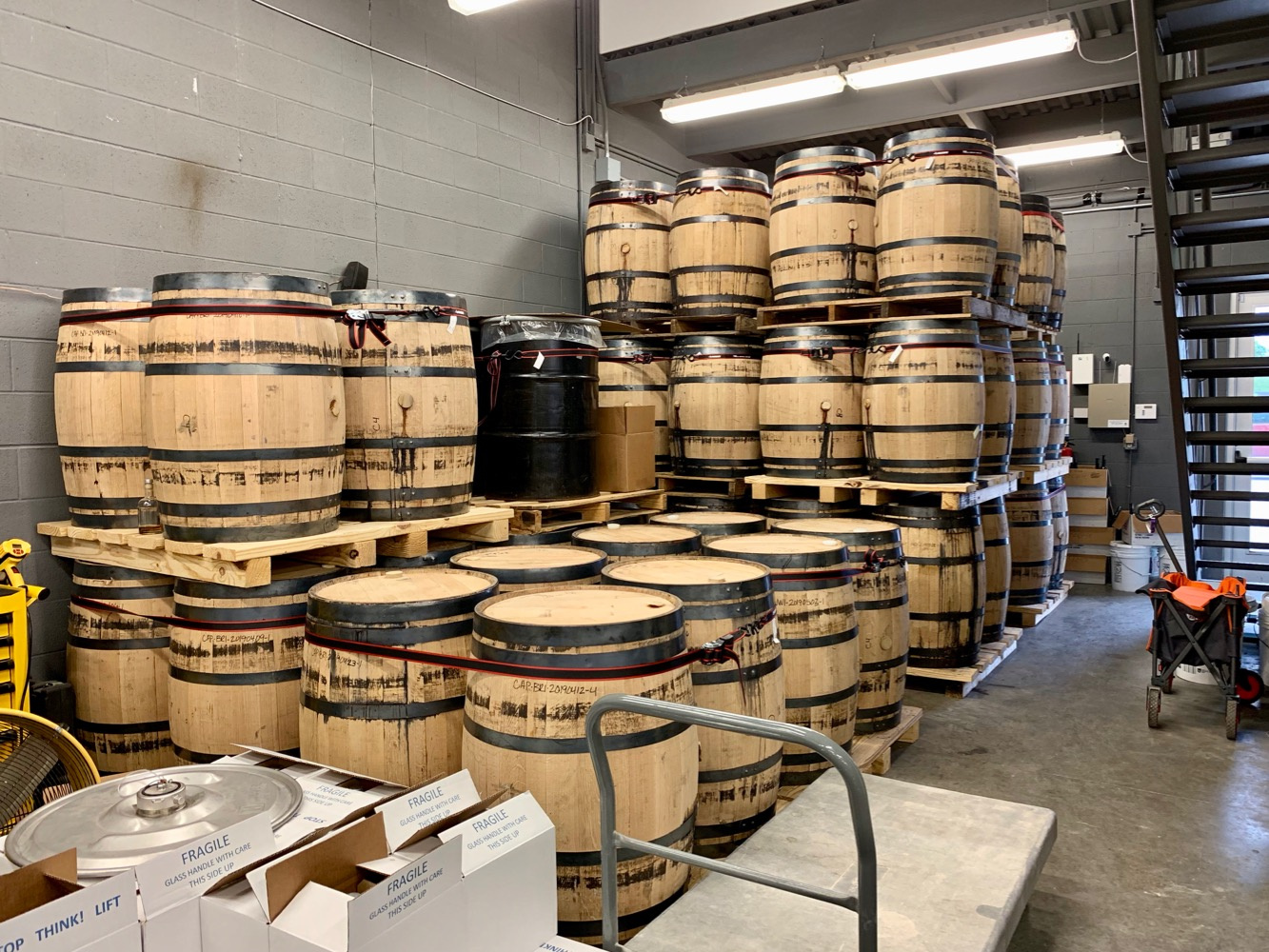 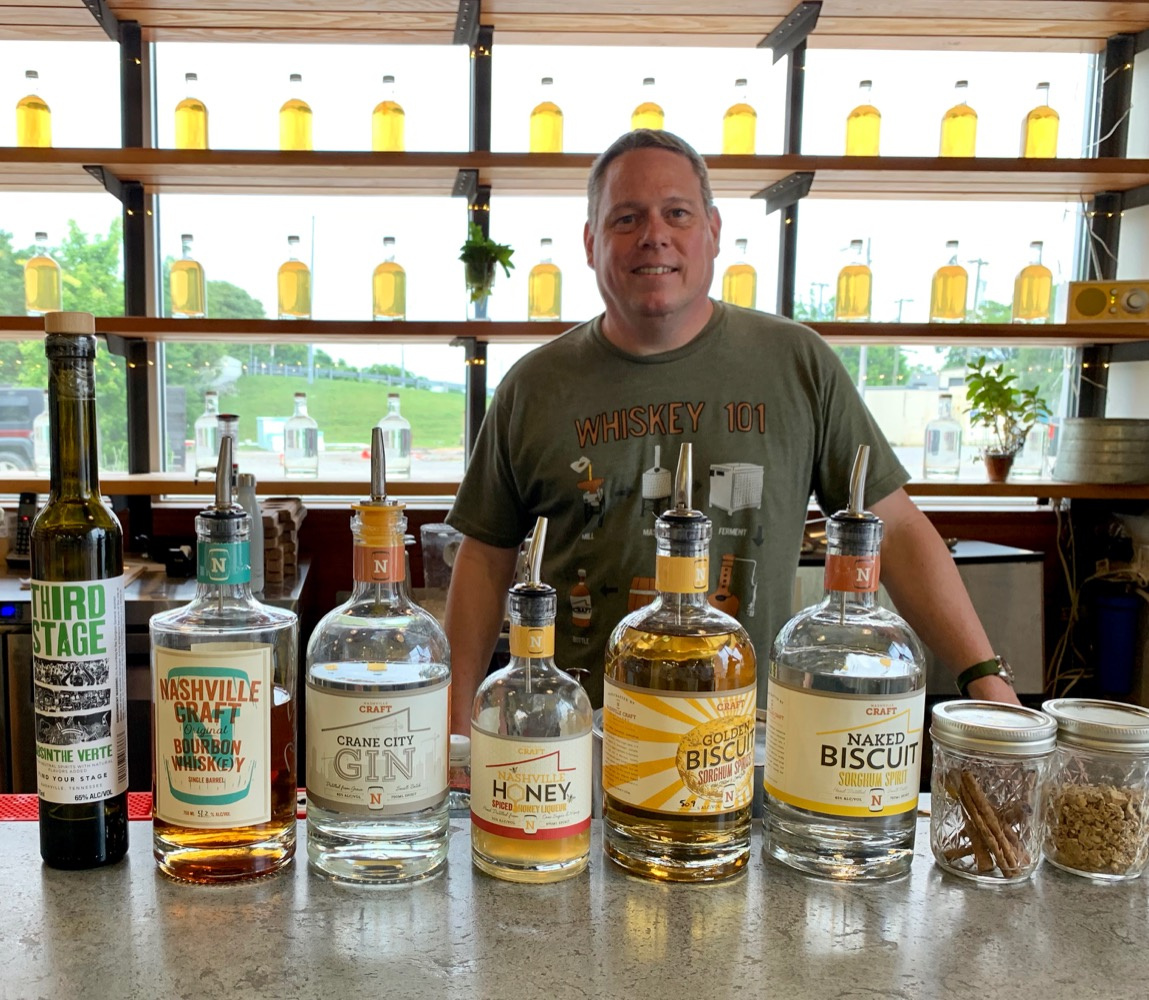 Nashville Craft Distillery - Everything is in one room. Mash tun, still, barrels and classroom

Nashville Craft Distillery - Tasting Bar. Bruce Boeko, Owner & Distiller, with some of his spirits
514 Hagan Street
Nashville, TN 37203
(615) 457-3036
According to the American Craft Spirits Association, and I paraphrase: A craft distillery is a distillery that values transparency, produces less than 750,000 gallons annually, and is independently owned and operated, with more than a 75% equity stake in their company, and maintains operational control.*  I mention this only to highlight the fact that “craft” may often be seen in terms of size, a small distillery, or a distillery that produces by old/traditional methods.  While the later frequently applies, we would soon learn how Nashville Craft Distillery most definitely meets the ACSA standards for a craft distillery.
The distillery is located less than 2 miles south of downtown Nashville in a slightly industrialized area.  The facility is newer, having opened  for business in March of 2016, and opened its doors to the public in May of 2016.  The large lettering used for their signage on the building makes the distillery easy to spot.
Typically we reserve our tour spots before we arrive, but because we were unsure of our schedule for the day, we chose to "walk-in".  Nashville Craft has an easy to navigate online reservation system.  It allows the user to view the entire month of choice while each day shows the number of tours available along with the number of tickets remaining for each tour time.  Tours are offered daily on the hour except Mondays.  The cost is $12 which includes 3 samples of your choice.  As a designated driver, the cost was $7, although this is not advertised.
There are basically 2 areas to the distillery.  In the front is the bar and gift shop area where newcomers are greeted and asked what is their pleasure (a tour, a cocktail, or a bottle to go). The back area houses the distillery equipment where the blood, sweat, and hopefully not too many tears, produces the much sought after liquid gold.
Not surprising is the fact that Nashville Craft is small, Rhode Island small.  It’s the shortest walking tour we’ve experienced.  This should in no way deter a visit, though, because the tour is unique on 2 fronts. First, all tours are led by 1 of the 2 distillers.  Distiller guided tours, if and when they happen, are usually specialty tours.  Here at Nashville Craft Distilling there is no tour guide to stump.  And secondly, tours focus on the technical aspects of fermentation and distillation.  Back to chemistry class we go!
Our tour was lead by former DNA laboratory director Bruce Boeko, turned owner and distiller.  With 30+ distillery tours under our belts, this was the first tour ever to cover the science of distillation.  The “class” began at the nifty dry erase board (please see photos) where the steps to fermentation and the distilling process were literally sketched out.  Nashville Craft sources its ingredients in a “farm to bottle” manner, purchasing them locally and regionally.  As there were only three of us on the tour, we were able to ask lots of questions.  Bruce was an open book. Even their yeast strain wasn’t off limits.
After the board work, we walked a few steps and next viewed the distillery equipment which included the mash tun, the fermenters, and the pot still.  This is all standard equipment in any distillery yet what made it more engaging was that the person producing the product was the one walking us through the process step by step.  Whether explaining the science or answering our numerous questions, Bruce continued to discuss their techniques  freely.  If we only had a still at home.
Our final few steps in the distillery brought us to the micro-sized rick area for barrel aging.  Given the size of the 250-gallon copper pot still, Nashville Craft currently produces no more than a few 53 gallon barrels a week.
The tour wrapped up in the bar area where a sampling of 3 spirits of choice were offered.  Our timing was perfect as Nashville Craft had just released their first bourbon whiskey, a wheated bourbon.  Other offerings included their Crane City Gin, Naked Biscuit Sorghum Spirit, Golden Biscuit Sorghum Spirit, Third Stage Absinthe Verte and Nashville Honey Spiced Honey Liqueur.
Nashville Craft is one distillery tour that should not be overlooked.  It might seem easy to pass over because of its size, but it’s rare to be able to see a working distillery in such an intimate setting and even rarer to learn directly from the distillers themselves.  The craft in Nashville Craft Distillery definitely meets the criteria for the ACSA definition.  Check it out for yourself; you might even feel a little smarter when you leave.
*